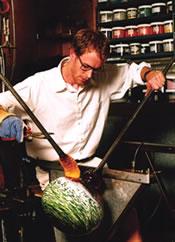 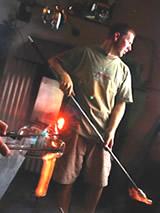 Hot Island Glass is a creative partnership between Chris Richards and Chris Lowry, two of the leading glassblowers in Hawai’i. Both artists have been involved in the studio/gallery since Bill and Sally Worcester founded it in 1992 as Maui’s first hot glass facility. In 2000, Chris and Chris became the owners and principal artists of Hot Island Glass.

Chris and Chris have successfully shown their stunning, one-of-a-kind works of art, individually and as a team, in several notable exhibitions throughout Hawai’i. Most recently, their work was included in Fire to Form, an invitational exhibit of contemporary glass by artists either working in Hawai’i or with ties to Hawai’i mounted jointly by the Contemporary Museum on Oahu and the Hui No’eau on Maui.